The Trials and Tribulations of Moron Cat and the Boxing Rodent

For those of you who don't read my blog regularly, my daughter has a cat named Megaroy.  I do not know why she named the cat Megaroy, but keep in mind that she also has a bonsai plant named Bathtub.  Megaroy is some kind of Maine Coon mix, whom we rescued and have kept ever since.  I've gotten a lot of literary mileage out of the cat and will probably continue to do so.  I'm maintaining that the cat is basically the dumbest cat in existence.  Pretty sure.  Of all the cats we've had over the last decades, Megaroy is the bottom of the heap.  This doesn't exactly make him a bad cat, but then he does weird shizz and that's more logs on the fire.
Case in point.  Megaroy loves to go into the garage.  Why?  Because there are mice out in the garage.  Why are the mice in the garage?  I do not know.  I will have to ask one, someday.

Yon stupid cat catches the mice, brings the mice into the house, and then releases the mice.  Yon mouse, who is obviously smarter than the cat, runs like hell and hides.  Yon humans also run and hide and throw in screams for variety.

Yesterday was no exception.

Here's a brief interlude for the person who just asked, "If the cat does this, then why, pritheetell, do you allow him to go back into the garage?"  Well, I did restrict him to daytime hours when the meeces don't seem to be active and it made him happy, because he's stupid and he doesn't realize that the meeces keep nighttime hours.  However, one mouse was obviously up and about during daytime and made the mistake of coming into the garage when the cat lies in wait.  I believe this particular mouse was stupider than the cat. 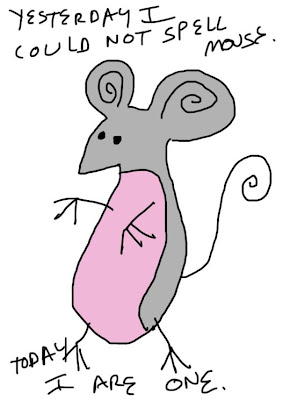 1.  As I've said, the mouse pranced into the garage during daylight hours.

2.  The mouse did not look right in front of him where the cat was just sitting there waiting for any mouse to prance in.

3.  The mouse did not immediately turn and run back outside.

4.  When Megaroy brought the mouse inside the house (I rhymed) and let him go, the mouse did not take the opportunity to run like hell.  Instead, the mouse turned, got onto his hind legs, and batted at Megaroy's face.  Imagine being chased by a Tyrannosaurus Rex and stopping to bat at the dinosaur's face.  Yes, exactly.  Dumb cat.  Dumber mouse.

5.  And instead of running outside, when the front door was opened for it, the mouse went for the sideboard where the moron cat laid on his side, idly pawing underneath for the pugilistic mouse.  And Megaroy, being moron cat, did not catch the mouse.  In fact, he eventually gave up and wanted to go back into the garage, where he might be able to catch a lesser violent mouse to play with. 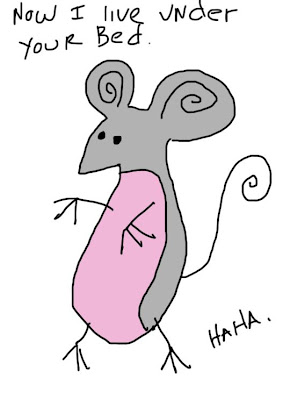 love it, we have SHERMAN LEE that lives under the bed, cabinets. you name it. every once it a while i see him. usually with out my glasses, at midnight, sitting on the pot !!! then i scream.